Rhino offers a great selection of native artificial lighting options and this article will explain which of them can be successfully utilized within Enscape.

Tip It is beyond the scope of this article to describe all the various ways to create lights in Rhino and for a deeper understanding of how Rhino lights function, we would recommend referring to the official Rhino support pages, here. Please note that Rhino does not support IES lighting.
NOTE It is worth noting at this point that if you have Auto Exposure enabled in the Enscape Settings window, and at the same time you only have a single light source placed in your scene, you will not see any effect from the artificial light because the Auto Exposure compensates for the light source intensity. Furthermore, if you have VRay installed, you will need to make sure that Rhino, and not VRay, is selected as the render engine in Rhino’s Render Properties, otherwise you will not see the Rhino Light controls. The last thing of note is that currently Enscape is not supporting IES Lighting in Rhino.

The quickest and easiest way to open and start working with lights in Rhino is to type ‘Lights‘ in the Rhino command line, after which Rhino’s Lights panel will open.
You can also open the Lights panel in Rhino via the Rhino Panels menu.

The Lights panel opens with two default lights already listed. These are the Sun and Skylight and are covered elsewhere in our Knowledgebase.
To place an artificial light in Rhino, click the + sign near the bottom of the Rhino Lights window and a menu will appear that lists all the different types of lights available in Rhino. Not all of these lights listed are support by Enscape however. 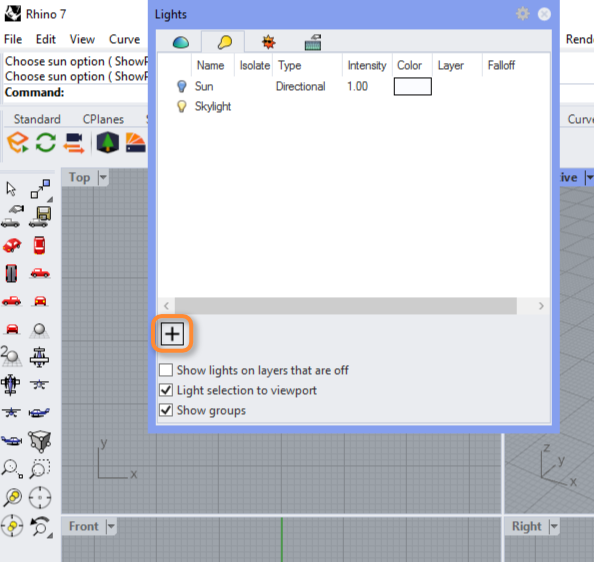 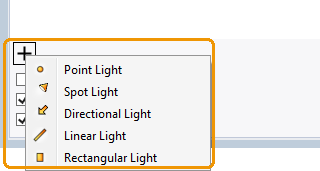 The lights that are available in Enscape are: 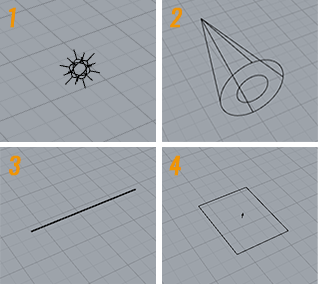 When you place a light in the scene, it becomes listed in Rhino’s Lights panel along with some of the light’s properties, such as it’s intensity, color, and also on which layer in Rhino it is residing. 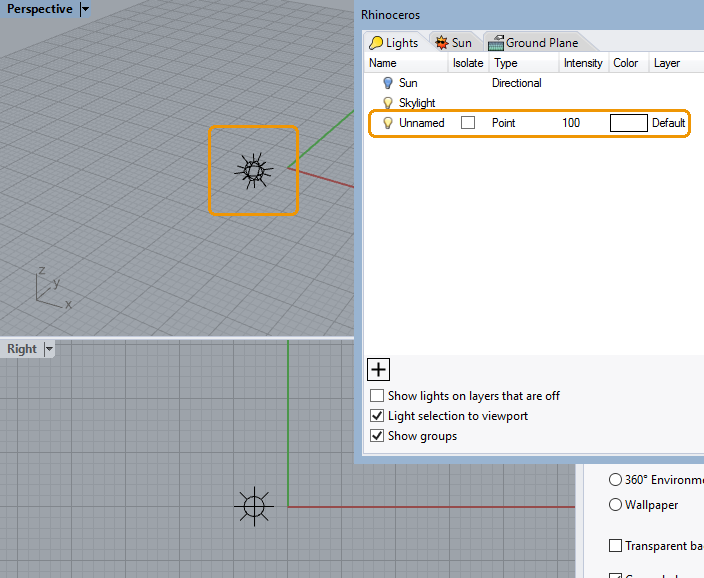 When right-clicking a light in Rhino’s Light panel, you are given the option to show the lights Properties panel, and this offers some extra options for a light if available for that light type. Any changes to a light’s properties will be instantly seen in Enscape as long as Enscape’s Live Update option is enabled.

Here, you can see a point light has been inserted into a scene (displayed in yellow) and it’s intensity and color have been adjusted from the Light’s Properties panel. These changes will be visible in the Enscape window instantly if Enscape’s Live Updates are enabled. 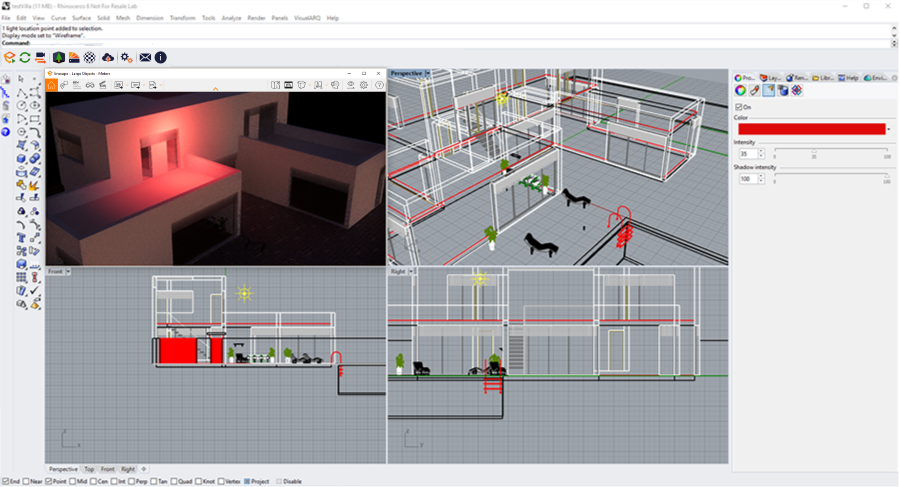 When placing a Spot Light in Rhino, the first click will define the lights cone base and the second click will define the cone direction. After placing the light Rhino provides a number of control points for you to adjust the light.
Furthermore, once placed, spotlights can have the Color, Intensity, Shadow intensity, and Spotlight hardness adjusted. 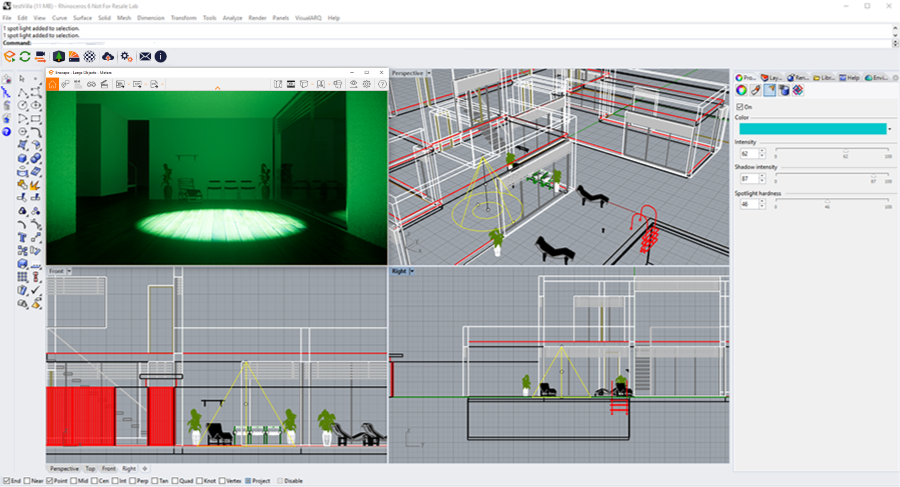 Linear lights are easily placed with two clicks, the first click will define the start point and the second click defines the length of the linear light. 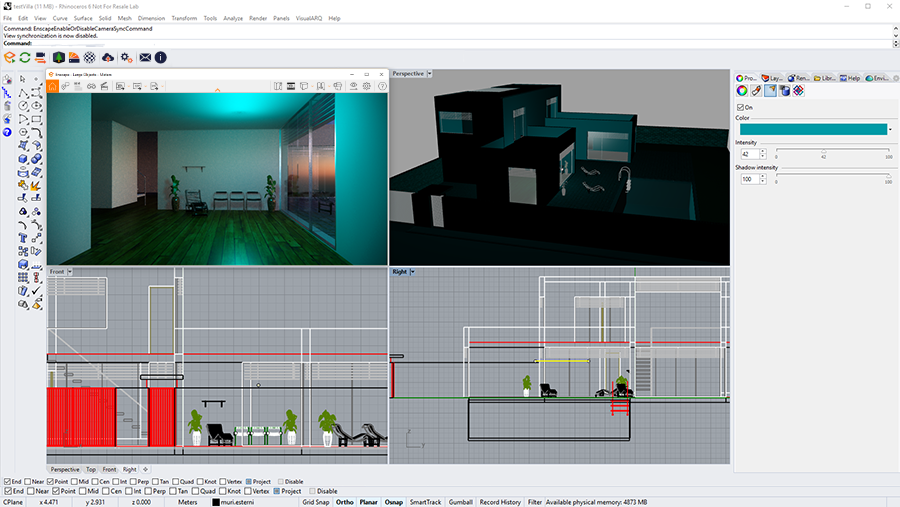 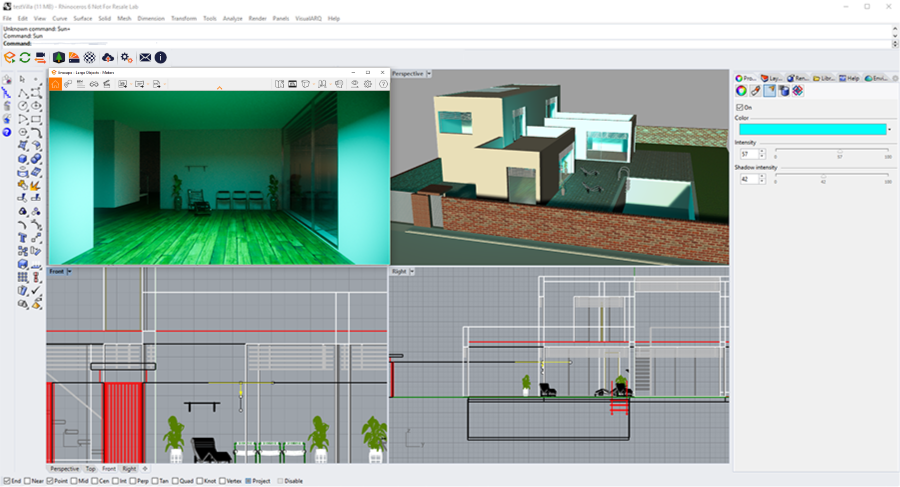 There is one other type of lighting option that is available in Rhino that has not been mentioned.
Self-Illuminated materials, that are not available via Rhino’s Light panel section, must be considered an additional lighting option.

Self-Illumination will act in a similar way as a Point Light but instead of emitting that light from one point, the light is emitted from the entire surface where the material is applied.

In the example screenshot below you can see that a cube object has been placed in the scene, highlighted in the Rhino Viewport as a yellow cube. This object initially requires that a default material is assigned to one or all of it’s surfaces and that the Material Type is set to Custom in the Rhino Material panel, or to Enscape if you want to use the Enscape Material Editor to adjust the emissive material.
Under the Advanced Settings section of the Material panel, make sure that Self-illumination is checked. Then set the Emission color.

Additionally, if editing the material in the Enscape Material Editor, then you can also adjust the materials luminosity.

To see the emissive surface in action, set the time of day in the Enscape window to night hours.

Self-Illumination with green applied as the emission color.

Watch the following to see a light being placed, colored, and the Intensity being changed in Rhino.

Follow Us on
Enscape Newsletter
Copyright All Rights Reserved © Enscape 2022 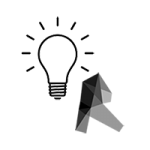 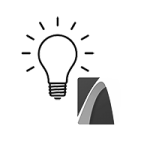